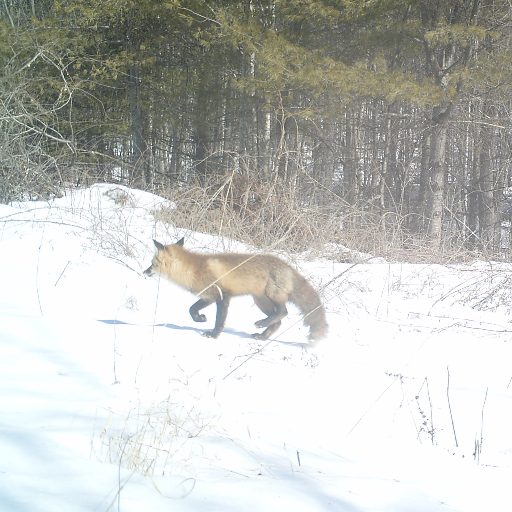 I am starting out this blog describing a few facts about trail cameras before I tell you a few facts about the Maine Red Fox.  Trail Cameras were originally designed and manufactured as a method for capturing wildlife pictures when hunters and researchers were not present. They are typically left in the woods strapped around trees and are built with motion sensor capabilities.  These motion detecters take a picture when they are triggered.    Trail cameras are  programmed with many key features including audio and video modes.  After much testing, trail cameras became a viable source to find out where and when animals were inhabiting certain areas.   In my future blog posts, I will continue to educate readers in more detail about the capabilities of trail cameras.
Now I am going to give you a few facts about Maine’s Red Fox.  I was always under the impression that fox were nocturnal animals, however, as my photo proves, fox will hunt during the day if they are comfortable with their surroundings.  The average weight is about 12 lbs.  They breed annually from December to March and with new litters bearing 5 new pups.  Due to excessive hunting, road accidents and disease, the population of has significantly decreased along with its life span.  The Red Fox were previously known the live up to 5 years, however, now their average life is 2-3 years.  In this picture, Maine had a mid-March snowfall and covered up this fox’s home.  He had been circling this area in desperate search for his family.  Fortunately for him, the snow completed melted within the next few days and is family is now roaming this area.

This site uses Akismet to reduce spam. Learn how your comment data is processed.